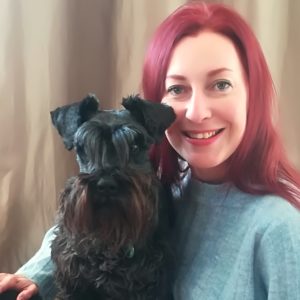 My husband and I decided not to have children and so Bismark, our mini schnauzer boy, is the child spirit in our house. We got him in 2014 and even took maternity leave to celebrate his new life! But in December 2017, at the age of three and a half, he was diagnosed with genetic heart disease. We were devastated. The prognosis was very poor and according to the vet, the only way to save him was with emergency open heart surgery, at a cost of R45 000! The vet didn’t have any information about healthier diet options, and warned that any squirrel hunting or running on the beach – the two things Bismark loves most – could result in sudden death.

The vet’s recommendation was a huge concern for us. Bismark suffered serious complications after his last routine vaccinations, and we were certain that anaesthesia and drugs would put him at a real risk to die on the operating table. We had several discussions with people whose dogs or children had the same heart condition, and it became clear that having open heart surgery could mean going down a rabbit’s hole of further surgeries, or that the complications resulting from the surgery could seriously interfere with his quality of life.

And so, after a painful period of contemplating and researching our options, we decided to avoid any drugs and to try the ‘natural route’ instead. The first step was to research his diet. We’d thought we were feeding him the best dog food on the market, and considered him a spoilt little show dog with very expensive taste! Until the extensive research started…

To our shock, the very first thing we realised was that dog kibble – even the very expensive, high quality Canadian kibble we fed him – contains traces of arsenic, and does not contain sufficient nutrients for a dog’s health. During processing, the raw ingredients get mixed up in a giant grinder. They could be the best, freshest, organic raw ingredients, sourced from a gorgeous farm filled with green grass and happy ducks; they still get heated and processed in the same way. Then the entire batch is heated and steamed, pushed through an extruder where it’s heated once again, and then sent to an oven to dry. A coating of fats and colourants is then sprayed onto the food (to coax your dog into eating it) before it’s packaged and sent off to stores.

This means that most of the ingredients in your dog’s kibble are heated and processed four times before they hit the bag, and heating and processing destroy the nutrients in food. It was clear to us that Bismark cannot eat kibble and get the necessary nutrients to support his heart functions. Nutritional deficiencies suppress a dog’s immune system; their organs will start to fail, and they can start to suffer from chronic inflammation, liver, kidney, heart, thyroid and other diseases. This was a scary wake-up call for us.

Next we researched his dog treats. We soon realised that some pet food companies buy raw goods from rendering facilities that process euthanized animals. This means that they are made from a variety of meats that humans wouldn’t eat, including diseased livestock, and pets containing lethal doses of sodium pentobarbital. After watching several disturbing videos of road kill and euthanized animals getting processed and packaged into colourful bags with pictures of happy dogs on the front, we banished all store-bought treats and biscuits too.

We had no choice but to hit the health stores and fresh food stores and start experimenting with freshly cooked food for Bismark. Our work was cut out for us as Mini Schnauzers are prone to diabetes and pancreatitis. This means they cannot tolerate any fat or junk food, and their blood sugar levels should be kept stable at all times of day. We tried many combinations of food: seeds, real meats, fish, organ meats, eggs, cottage cheese, fruits, vegetables and everything else that we could find that would help his heart function optimally. We even tried Chinese herbal teas, hemp seed powder, seaweed variations and natural heart supplements. He couldn’t tolerate anything raw, so everything had to be lightly cooked.

And then … the miracle happened. Our lethargic, tired boy who could hardly complete a Schnauzer walk at the club, turned into the most energetic, shiny-coated, friendly and mischievous dog we have ever met. His eyes sparkled, his itchy skin healed and he started up a new mole digging hobby at the park next to our house.

A year after his diagnosis, we are certain that we have extended his life and rescued him from premature death with his new diet. Bismark might not reach the full 15-year life span expected for a Schnauzer because of the genetic heart defect, but we are happy we are able to watch him hunt for squirrels and chase sea gulls on the beach every day until he is no longer with us.

That is why we have decided to share his diet with other dog owners out there, who might be facing the same truths about the food they are feeding their dogs, or whose dogs have health issues that could be improved by a balanced and nutritious diet.